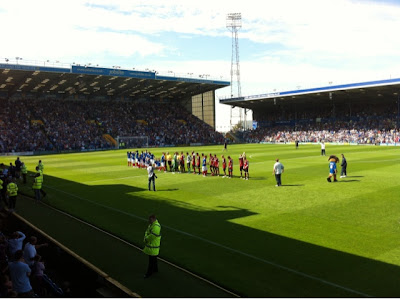 Yesterday I took a drive down to Fratton Park with my dad to watch my beloved Portsmouth football club take on AFC Bournemouth in our first game of the season down in league one.

After all the crap the club have had over the last couple of years and being in administration with points being deducted and having to sell all of our players i didn't think we had much of a chance of getting any points on the table as the team we fielded have only just been thrown together from our youth team and last minute loan deals. To my surprise we was all over Bournemouth in the first half, we took the lead through a goal from McLeod that found its way between the goalkeepers legs, it was an awesome feeling again celebrating a goal at the park :)

Unfortunately Bournemouth pulled a goal back in the second half as we started to fade and it finished 1-1. It's still a great result from our bunch of lads, Play up Pompey!!

If your local get down to Fratton Park and give Portsmouth FC your support, I will be taking Grace for the first time this season, trying to give her the Pompey bug :)